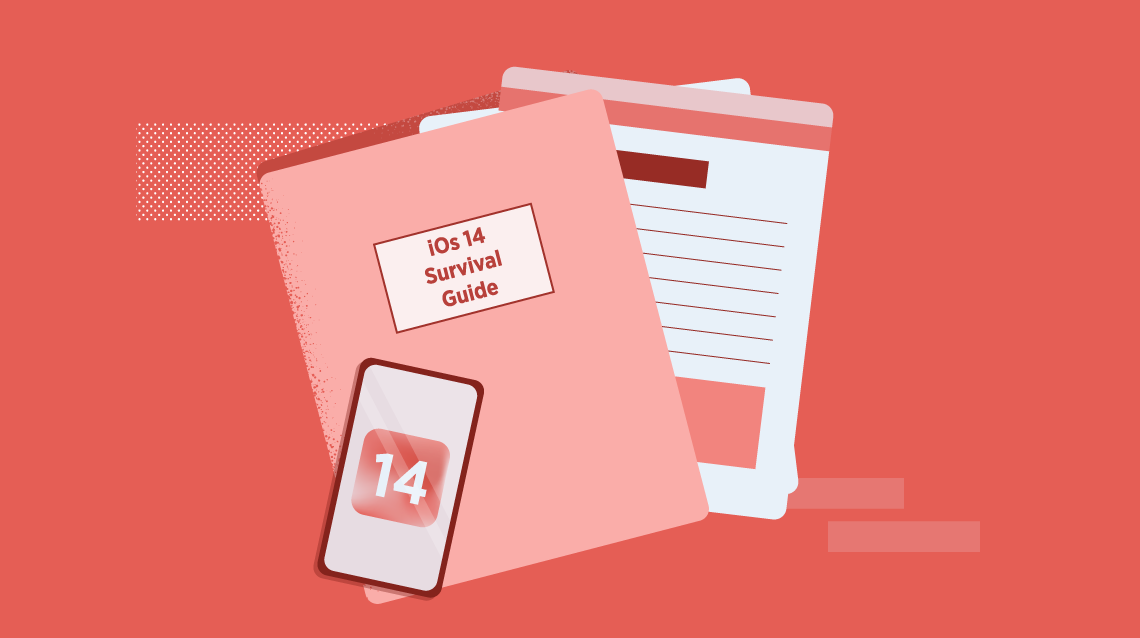 “Pretty much everything goes through chaos, but in chaos there’s opportunity.”

That’s how Scott Desgrosseilliers, founder of Wicked Reports, sees the upcoming iOS 14 update. Things will change as Apple starts to ask users if they want their data tracked by apps—and marketers have to learn to be okay with that.

Yet, we’re a savvy bunch. We know just because changes are on the horizon, that doesn’t mean it’s the end. We’ve lived through platform shifts, algorithm changes and have already questioned whether we need to make a dancing TikTok video to be relevant.

Bring on the changes.

With Scott’s help, we’re going to show you the 5 things to do right now to help your business survive the iOS 14 update. First, let’s talk about what the update means for iOS users.

Here’s What the iOS Update Will Change

This summer, iOS users will get a notification on their phone that asks them if they want to opt-in to having apps track their data. The notification will look like this, except Apple will *definitely* run it by a few editors to make sure they don’t make the same mistake they made when introducing the notification via CEO Tim Cook’s tweet.

On an app-by-app basis, users can choose if the app can track their data across other apps or websites. If this feels like a direct target on retargeting…you’ve nailed it. The update changes more than just retargeting, though. Let’s take a look at a scenario Scott created for Get Maine Lobster.

It’s all in the type of data. Facebook data collection is considered third-party. Since Justin is one of the parties and the other party is Get Maine Lobster, Facebook becomes the unlucky third wheel. Technically, Facebook doesn’t have a connection to Justin or to Get Maine Lobster. That means they don’t need to collect that data from users. They’ve been doing it for years now, but the new iOS update will allow Apple users to opt-out.

As long as companies use their own version of tracking, they can use data even if the iOS user has opted out of having their data collected by the platform.

To get into more of the specifics around the difference between first-party data and third-party data, take a look at this image courtesy of Scott.

As the iOS 14 update looms closer, Scott leads his clients through 5 specific strategies to make sure their businesses can survive the changes.

Here are Scott Desgrosseilliers’s strategies for navigating the iOS 14 update.

5 Things to Do Right Now #1: Create a Landing Page for Your Product Page

Customer Lifetime Value is the average amount you make from your customers. For each customer, you’ll keep tabs on their spending to get your LTV and know what to expect from each customer avatar you convert into a customer.

#2: Use Email Automation to Close Leads

Once you’ve captured a user’s email address, you’ll use email automation to close the sale. Since you can’t rely on Facebook to keep retargeting those users, email is going to be your ultimate tool. Email automation doesn’t have to be complicated. You just need a good funnel that pushes your products to the right people. If someone signed up for your email list—they’re the right person!

Using this strategy, Get Maine Lobster was able to pull in $11 million in conversion value that ad platforms never knew existed. These platforms never knew that certain customers had bought after going through the email funnel, which means they couldn’t optimize as well for lead generation.

Scott loves this strategy because it avoids the ‘Spray and Pray’ marketing he sees happening too often. Instead of trying to get as many people as possible to see your ad and hoping that they’ll convert after seeing your first, second, or third ad—bring them into your email funnel and take ownership of the rest of the journey.

To recap, your marketing funnel looks like this so far:

Inside Facebook, you’ll use these top-performing lead generation ad sets:

Remember to exclude everyone on your existing email list from these ad sets. You don’t need to spend money to get impressions from people who have already bought from you. There’s nothing ‘wicked’ about that.

#4: Use People-Based Lead Generation on Google

Ideas: Reach potential customers while they’re actively browsing, researching, or comparing the types of products you sell. Using Ideas, you can connect with those most interested in what you have to offer, using precise segments that classify users based on their demonstrated in-market behavior and purchase intent.

Browse People-Based Targeting: Set up a custom audience in your Display, Discovery, Gmail, and Video campaigns by adding specific keywords, URLs, and apps related to your product or service. Google Ads will show ads to people with these interests or purchase intentions on pages, apps, and videos.

Category Search of People-Based Targeting: With affinity audiences, you can reach people based on a holistic picture of their lifestyles, passions, and habits. Affinity audiences have demonstrated a qualified passion for a given topic, allowing advertisers to reach the people who matter most with their products or offers.

Google Lead Form Extensions: Allows lead capture inside Google search or YouTube and works similarly to Facebook lead ads (with pre-filled forms in some cases). The key is to get leads from Google to your customer relationship manager (CRM) to enable your lead generation strategy. You can do this with Zapier, CSV download, Wicked Reports, etc.

YouTube TrueView: Allows clickable calls to action overlayed on your video that sends users directly to the same landing page offer we discussed above. This enables your lead generation strategy and puts those leads right into your email funnel.

#5: Measure ROI to Scale Your Winners, Kill the Losers, and Chill the Rest

You’re already doing this with your current ad sets, but now it’s time to do this with your new varying Person-Based audiences. Make sure to keep tabs on the data to be sure that you’re putting your money behind the best audiences for your products.

As Scott says, “scale your winners, kill the losers, and chill the rest.”

Data and marketing are absolute best friends, if not fraternal twins. They have their differences, but they get along so damn well. With Wicked Reports, Scott can help his clients get first-party data (the new holy grail of the data world thanks to the iOS 14 update). He can keep using this data in the future, even after the iOS 14 update makes its way to every iPhone, and that’s what makes it so powerful.

The iOS 14 update launch date is set for the summer of 2021. As we all wait to see how the update ends up changing the marketing landscape as we know it, there is a lot that we can do to prepare for it.

Start building out landing pages for your products and using Scott’s strategy of bringing users through your email funnel. If Get Maine Lobster can pull in an extra $11 million in conversion value (are there even that many lobsters in Maine?!), you can do the same. As Scott explains, you just need a simple, solid funnel. Don’t worry about having all of the bells and whistles.

The iOS 14 update is sure to bring chaos, but it’s also bringing a lot of opportunities. As a business owner or marketer, you get to choose which side you want to be on.

You can either be in a state of pure chaos when the update hits or ready for the new opportunity it’s bringing. Let’s follow Scott’s lead and create opportunity out of change.

The post 5 Things to Do Right Now to Help Your Business Survive the iOS 14 Update appeared first on DigitalMarketer.