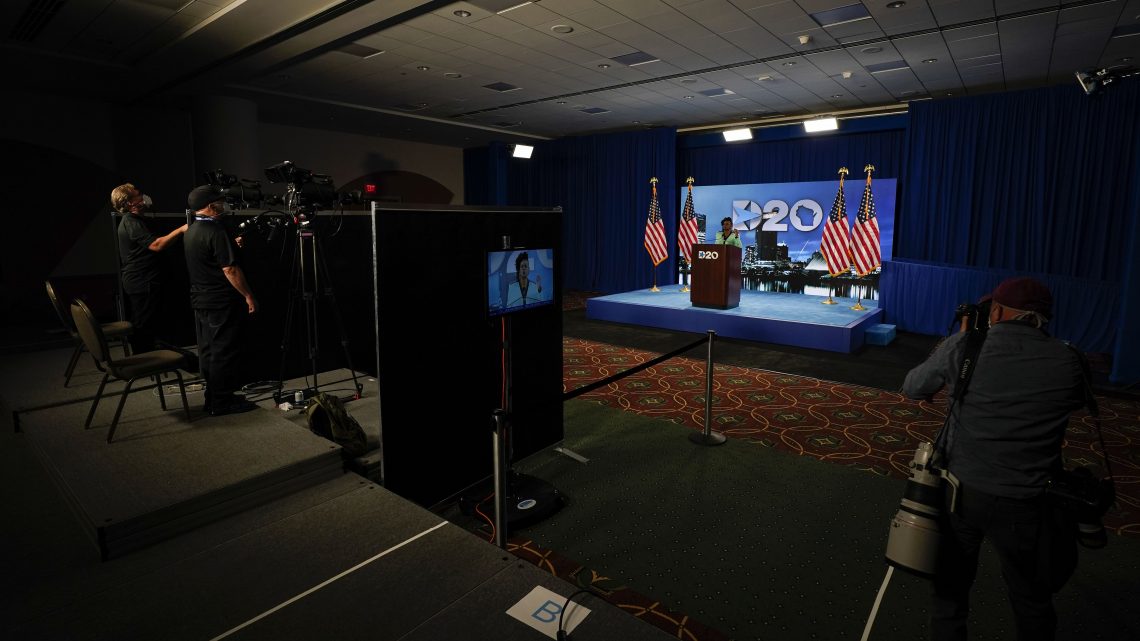 The first all-virtual Democratic National Convention is in full swing, but don’t expect fireworks. The event runs through Thursday in a truncated-for-TV two hours a night that’s apparently not setting any viewership records, even with most Americans stuck at home.

It likely won’t come as a surprise to anyone who’s followed former Vice President Joe Biden’s unlikely rise to the top of the party this year, but this year’s unusual DNC doesn’t inject any interesting social media twists or pull off any amazing technical feats of virtual presence.

Like we saw in the race for the Democratic nomination, what works appears to have prevailed — even if it doesn’t excite. And if the week continues without any viral gaffes or technical failures, the Democrats’ big event will serve as a solid virtual baseline for comparison with next week’s sure-to-be-wild Republican nominating convention. The main objective of the nominating event this year seems to be making it through without any notable catastrophes, which in 2020 is actually a pretty lofty goal.

This year the DNC is being held in Milwaukee, Wisconsin, but nearly all of its speakers are being beamed in from elsewhere in the country. Musical performances from Leon Bridges on a rooftop and an oceanside Maggie Rogers broke up some of the stiffer portions, but broadcasts still abruptly cut away from them for commentary.

The DNC’s first night relied heavily on pre-recorded video, from effectively dramatic montages about a nation in crisis to Michelle Obama’s emotional appeal against four more years of Trumpism. Large chunks of the programming were pre-recorded — a wise move for avoiding technical glitches but one that considerably dampened the electricity. In spite of the format challenges, a handful of powerful moments still managed to stir emotions for the sofa-bound.

… So it’s up to us to carry on the fight for justice."#DemConvention pic.twitter.com/bZ7Nt4kn5J

In the first night’s early moments, the brothers of George Floyd, an unarmed Black man brutally killed by Minnesota police officers, called for the country to maintain momentum in the racial justice movement that followed their brother’s tragic death.

“We must always find ourselves in what John Lewis called, ‘good trouble’ for the names we do not know, the faces we’ll never see, those who can’t mourn because their murders didn’t go viral,” Philonise Floyd said, leading into a moment of silence.

The ever-fiery former Biden rival Sen. Bernie Sanders was another exception to the lull of a not-quite-live event. Addressing the nation live from a wood pile in his Vermont home, the senator warned of a dark future if the national slide into authoritarianism deepens through Trump’s reelection. “Nero fiddled while Rome burned,” Sanders said. “Trump golfs.”

.@BernieSanders is right: We must come together and defeat Donald Trump. #DemConvention pic.twitter.com/KA12s9rTle

Other moments managed to break through too. Michelle Obama’s words felt just as urgent and immediate as any live speech and are definitely worth watching. In another emotionally-charged moment, Kristin Urquiza, the daughter of a man who died from COVID-19, channeled national anger at the failed U.S. response to an epidemic that’s completely upended daily life and claimed more than 170,000 American lives.

“His only pre-existing condition was trusting Donald Trump,” Urquiza said of her father, her anger palpable.

"We have got to do everything we can to elect my friend, @JoeBiden, as the next president of the United States" – @MichelleObama #DemConvention pic.twitter.com/12Ri4MpNVj

While the first night of the DNC elevated the national protest movement against police violence and anti-Black racism, its second night lineup looks less inspired. But considering that Monday gave generous screen time to Republican John Kasich’s appeal against Trump, the convention’s focus on the center of the political spectrum likely won’t come as a shock.

In a weird moment for both tech and politics, Quibi CEO Meg Whitman, the Republican former chief executive of HP, made her own unlikely anti-Trump cameo.

“I’m a longtime Republican and a longtime CEO — and let me tell you, Donald Trump has no clue how to run a business, let alone an economy,” Whitman said. Tech didn’t have many other moments, unless you count the suitcase with the iPhone.

"I'm a longtime Republican and a longtime CEO – and let me tell you, Donald Trump has no clue how to run a business, let alone an economy." – @MegWhitman#DemConvention pic.twitter.com/UTvOKCKhjE

Between the lack of spontaneous moments and the scarcity of speakers further left, young and otherwise left-leaning viewers might only tune in for a few moments Tuesday. One of those is bound to be the controversially brief slot allotted to progressive star Rep. Alexandria Ocasio-Cortez, who will deliver one minute of prepared remarks. Tuesday will also feature Georgia’s Stacey Abrams, who ran for governor in 2018 and now continues her advocacy work with Fair Fight, her voting rights organization. Abrams won’t appear solo though — in lieu of a proper second night keynote, she’ll be joined by 16 other young rising figures in the Democratic party who will share the time.

Anyone wistful for Democratic eras gone by can watch former Presidents Bill Clinton and Jimmy Carter speak Tuesday along with former U.S. Secretary of State John Kerry. The DNC’s second night also looks set to dive a bit deeper into policy, with two segments refreshingly focused on Joe Biden’s plans for governing, one on healthcare and one on national security.

If you can stomach some primetime politics in the midst of colliding national crises, catch up on the first night here or tune into night when the stream begins at 6PM PT below.

Startups Weekly: The US is finally getting serious about 5G