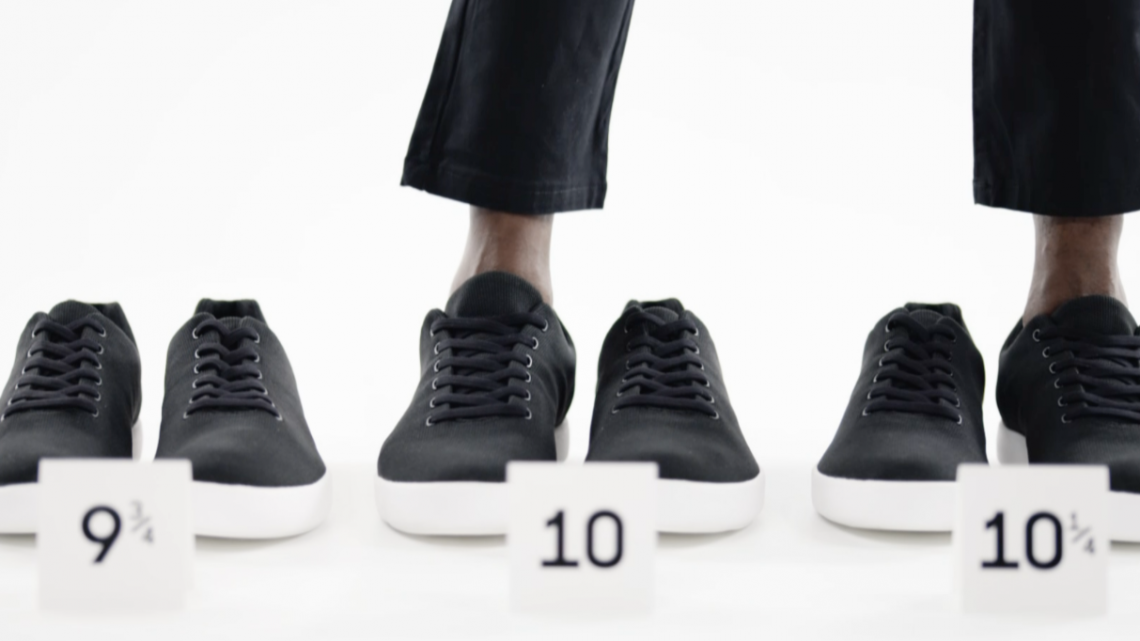 Atoms nabs $8.1M for shoes you can buy in quarter sizes and separate left/right measurements

The direct-to-consumer trend in fashion has been one of the most interesting evolutions in e-commerce in the last several years, and today one of the trailblazers in the world of footwear is picking up some money from a list of illustrious backers to bring its concept to the masses.

Atoms, makers of sleek sneakers that are minimalist in style — “We will make only one shoe design a year, but we want to make that really well,” said co-founder Sidra Qasim — but not in substance — carefully crafted with comfort and durability in mind, sizes come in quarter increments and you can buy different measurements for each foot if your feet are among the millions that are not exactly the same size — has raised $8.1 million.

The company plans to use the funding to invest in further development of its shoes, and to expand its retail and marketing presence. To date, the company has been selling directly to consumers in the US via its website — which at one point had a waiting list of nearly 40,000 people — and the idea will be to fold in other experiences including selling in physical spaces in the future.

This Series A speaks to a number of interesting investors flocking to the company.

It is being led by Initialized Capital, the investment firm started by Reddit co-founder Alexis Ohanian and Garry Tan (both had first encountered Atoms and its co-founders, Qasim and CEO Waqas Ali — as mentors when the Pakistani husband and wife team were going through Y-Combinator with their previous high-end shoe startup, Markhor); with other backers including Kleiner Perkins, Dollar Shave Club CEO Michael Dubin, Acumen founder and CEO Jacqueline Novograts, LinkedIn CEO Jeff Weiner, TED curator Chris Anderson, the rapper Chamillionaire and previous backers Aatif Awan and Shrug Capital.

Investors have come to the company by way of being customers. “The thing that I love about Atoms is that it isn’t just a different look, it’s a different feel,” said Ohanian in a statement. “When I put on a pair for the first time, it was a totally unique experience. Atoms are more comfortable by an order of magnitude than any other shoe I’ve tried, and they quickly became the go-to shoe in my rotation whenever I was stepping out. That wouldn’t mean anything if the shoes didn’t look great. Luckily, that’s not a problem, I wear my Atoms all the time and even my fashion designer wife is a fan.”

Even before today’s achievement of closing a Series A, the startup has come a long way on a relative shoestring: with just around $560,000 in seed funding and some of the founders’ own savings, Atoms built a supply chain of companies that would make the materials and shoes that it wanted, and developed a gradual but strong marketing pipeline with influential people in tech, fashion and design. (That success no doubt played a big role in securing the Series A to double down and continue to build the company.)

Within the bigger trend of direct-to-consumer retail — where smaller brands are leveraging advances in e-commerce, social media and wider internet usage to build vertically-integrated businesses that bypass traditional retailers and bigger e-commerce storefronts to source their customers and sales more directly — there has been a secondary trend disrupting the very products that are being sold by using technology and advances in manufacturing. Third Love is another example in this category: the company has built a huge business selling bras and other undergarments to women by completely rethinking how they are sized, and specifically by focusing on creating as wide a range of sizes as possible.

So while companies like Allbirds — which itself is very well capitalised — may look like direct competitors to Atoms, the company currently stands apart from the pack because of its own very distinctive approach to building a mass-market business, but one that aims to make its product as individualised as possible.

You might think that approaching shoe manufacturers with the idea of creating smaller size increments and manufacturing shoes as single items rather than pairs would have been a formidable task, but as it turned out, Atoms seemed to come along at the right place and the right time.

“We thought it would be challenging, and it wasn’t unchallenging, but the good thing was that many manufacturers were already starting to think about this,” Ali said. “Think about it, there has been almost no innovation in shoe making in the last thirty or forty years.” He said they were happy to talk to Atoms because “we were the first and only company looking at shoes this way.” That helped encourage him and Qasim, he added. “We knew we would be able to figure it all out.”

Nevertheless, the pair admit that the upfront costs have been very high (they would not say how high), but given the principle of economies of scale, the more shoes that Atoms sells, the better the economics.

Currently the shoes sell for $179 a pair, which is not cheap and puts them at the high end of the market, so it will be interesting to see how and if price points evolve as it matures as a business, and competitors big and small begin to catch onto the idea of selling their own footwear at a wider range of sizes.

My colleague Josh, who first wrote about Atoms when they launched, is our own in-house tester, and as someone who could have easily moved on to another pair of kicks after he hit publish, he remains a fan:

“My Atoms have held up incredibly well from daily wear for 14 months,” he said. “They’re still my comfiest shoes and make Nikes feel uncomfortable when I try them again. They’ve sustained a tiny bit of wear on the front of the foam sole (the toe just below the fabric) while the bottoms have worn down a little like any shoes.

“The mesh fabric can pick up dirt or dust if you take them in the wilderness, and the sole isn’t hard enough that you won’t feel point rocks. But throwing them in the wash or a rub with a brush and they practically look new. The elastic laces are incredibly convenient.

“I’ve probably tied them 4 times since first lacing them up. And for a cleaner, more professional look you can tuck the bow of your laces behind the tongue. Their biggest problem is they’re porous and can let water through if you wear them in the rain or puddles.

“Overall, I’ve found them to be my best travel shoes because they’re so versatile. I can walk all day in them, but then go to a fancy dinner or nightclub. I can hike or even hit the gym with them if necessary, and they pack quite flat. With the quarter-sizing and different use cases, they make Allbirds look like restrictive outdoor slippers. For adults who still want to wear sneakers, the monochromatic color schemes and brandless, simple styles make Atoms feel as mature and reliable as you can get.”

Ali said that among those who buy one pair, some 85% have returned and purchased more, and that’s before it has even gone outside the US. Qasim said there has been a lot of interest in other regions, but for now it’s still following its original formula of keeping the organisation and business small and tight, with no plans to expand to further countries for the moment.

Atoms nabs $8.1M for shoes you can buy in quarter sizes for each foot