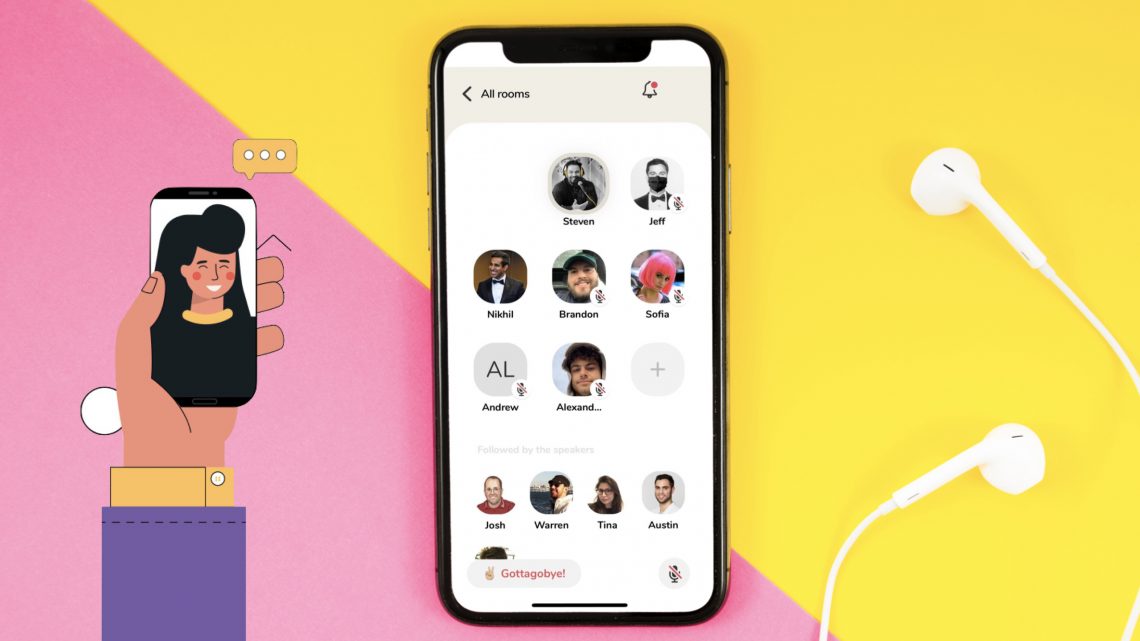 Forget the calendar invite. Just jump into a conversation. That’s the idea powering a fresh batch of social startups poised to take advantage of our cleared schedules amidst quarantine. But they could also change the way we work and socialize long after COVID-19 by bringing the free-flowing, ad-hoc communication of parties and open office plans online. While “Live” has become synonymous with performative streaming, these new apps instead spread the limelight across several users as well as the task, game, or discussion at hand.

The most buzzy of these startups is Clubhouse, an audio-based social network where people can spontaneously jump into voice chat rooms together. You see the unlabeled rooms of all the people you follow, and you can join to talk or just listen along, milling around to find what interests you. High-energy rooms attract crowds while slower ones see participants slip out to join other chat circles.

Clubhouse blew up this weekend on VC Twitter as people scrambled for exclusive invites, humblebragged about their membership, or made fun of everyone’s FOMO. For now, there’s no public app or access. The name Clubhouse perfectly captures how people long to be part of the in-crowd.

Clubhouse was built by Paul Davison, who previously founded serendipitous offline people-meeting location app Highlight and reveal-your-whole-camera-roll app Shorts before his team was acquired by Pinterest in 2016. This year he debuted his Alpha Exploration Co startup studio and launched Talkshow for instantly broadcasting radio-style call-in shows. Spontaneity is the thread that ties Davison’s work together, whether its for making new friends, sharing your life, transmitting your thoughts, or having a discussion.

It’s very early days for Clubhouse. It doesn’t even have a website. There’s no telling exactly what it will be like if or when it officially launches, and Davison and his co-founder Rohan Seth declined to comment. But the positive reception shows a desire for a more immediate, multi-media approach to discussion that updates what Twitter did with text.

What quarantine has revealed is that when you separate everyone, spontaneity is a big thing you miss. In your office, that could be having a random watercooler chat with a co-worker or commenting aloud about something funny you found on the internet. At a party, it could be wandering up to chat with group of people because you know one of them or overhear something interesting. That’s lacking while we’re stuck home since we’ve stigmatized randomly phoning a friend, differing to asynchronous text despite its lack of urgency.

Scheduled Zoom calls, utilitarian Slack threads, and endless email chains don’t capture the thrill of surprise or the joy of conversation that giddily revs up as people riff off each other’s ideas. But smart app developers are also realizing that spontaneity doesn’t mean constantly interrupting people’s life or workflow. They give people the power to decide when they are or aren’t available or signal that they’re not to be disturbed so they’re only thrust into social connection when they want it.

Houseparty embodies this spontaneity. It’s become the breakout hit of quarantine by letting people on a whim join group video chat rooms with friends the second they open the app. It saw 50 million downloads in a month, up 70X over its pre-COVID levels in some places. It’s become the #1 social app in 82 countries including the US, and #1 overall in 16 countries.

Originally built for gaming, Discord lets communities spontaneously connect through persistent video, voice, and chat rooms. It’s seen a 50% increase in US daily voice users with spikes in shelter-in-place early adopter states like California, New York, New Jersey, and Washington. Bunch, for video chat overlayed on mobile gaming, is also climbing the charts and going mainstream with its user base shifting to become majority female as they talk for 1.5 million minutes per day. Both apps make it easy to join up with pals and pick something to play together.

Enterprise video chat tools are adapting to spontaneity as an alternative to heavy-handed, pre-meditated Zoom calls. There’s been a backlash as people realize they don’t get anything done by scheduling back-to-back video chats all day.

Loom lets you quickly record and send a video clip to co-workers that they can watch at their leisure, with back-and-forth conversation sped up because videos are uploaded as they’re shot.

Around overlays small circular video windows atop your screen so you can instantly communicate with colleagues while most of your desktop stays focused on your actual work.

Screen exists as a tiny widget that can launch a collaborative screenshare where everyone gets a cursor to control the shared window so they can improvisationally code, design, write, and annotate.

Pragli is an avatar-based virtual office where you can see if someone’s in a calendar meeting, away, or in flow listening to music so you know when to instantly open a voice or video chat channel together without having to purposefully find a time everyone’s free. But instead of following you home like Slack, Pragli lets you sign in and out of the virtual office to start and end your day.

While visual communication has been the breakout feature of our mobile phones by allowing us to show where we are, shelter-in-place means we don’t have much to show. That’s expanded the opportunity for tools that take a less-is-more approach to spontaneous communication. Whether for remote partying or rapid problem solving, new apps beyond Clubhouse are incorporating voice rather than just video. Voice offers a way to rapidly exchange information and feel present together without dominating our workspace or attention, or forcing people into an uncomfortable spotlight.

High Fidelity is Second Life co-founder Philip Rosedale’s $72 million-funded current startup. After recently pivoting away from building a virtual reality co-working tool, High Fidelity has begun testing a voice and headphones-based online event platform and gathering place. The early beta lets users move their dot around a map and hear the voice of anyone close to them with spatial audio so voices get louder as you get closer to someone, and shift between your ears as you move past them. You can spontaneously approach and depart little clusters of dots to explore different conversations within earshot.

High Fidelity is currently using a satellite photo of Burning Man as its test map. It allows DJs to set up in different corners, and listeners to stroll between them or walk off with a friend to chat, similar to the real offline event. Since Burning Man was cancelled this year, High Fidelity could potentially be a candidate for holding the scheduled virtual version the organizers have promised.

His new startup’s site explains that “/talk is an anti-meeting tool for fast, decentralized conversations. We believe most meetings can be eliminated if the right people are connected at the right time to discuss the right topics, for just as long as necessary.” It lets people quickly jump into a voice or video chat to get something sorted without delaying until a calendared collab session.

Whether for work or play, these spontaneous apps can conjure times from our more unstructured youth. Whether sifting through the cafeteria or school yard, seeing who else is at the mall, walking through halls of open doors in college dorms, or hanging at the student union or campus square, the pre-adult years offer many opportunities for impromptu social interation.

As we age and move into our separate homes, we literally erect walls that limit our ability to perceive the social cues that signal that someone’s available for unprompted communication. That’s spawned apps like Down To Lunch and Snapchat acquisition Zenly, and Facebook’s upcoming Messenger status feature designed to break through those barriers and make it feel less desperate to ask someone to hang out offline.

Under quarantine, media is actually social

But while socializing or collaborating IRL requires transportation logistics and usually a plan, the new social apps discussed here bring us together instantly, thereby eliminating the need to schedule togetherness ahead of time. Gone too are the geographic limits restraining you to connect only with those within a reasonable commute. Digitally, you can pick from your whole network. And quarantines have further opened our options by emptying parts of our calendars.

Absent those frictions, what shines through is our intention. We can connect with who we want and accomplish what we want. Spontaneous apps open the channel so our impulsive human nature can shine through.

What is a Marketing Agency?