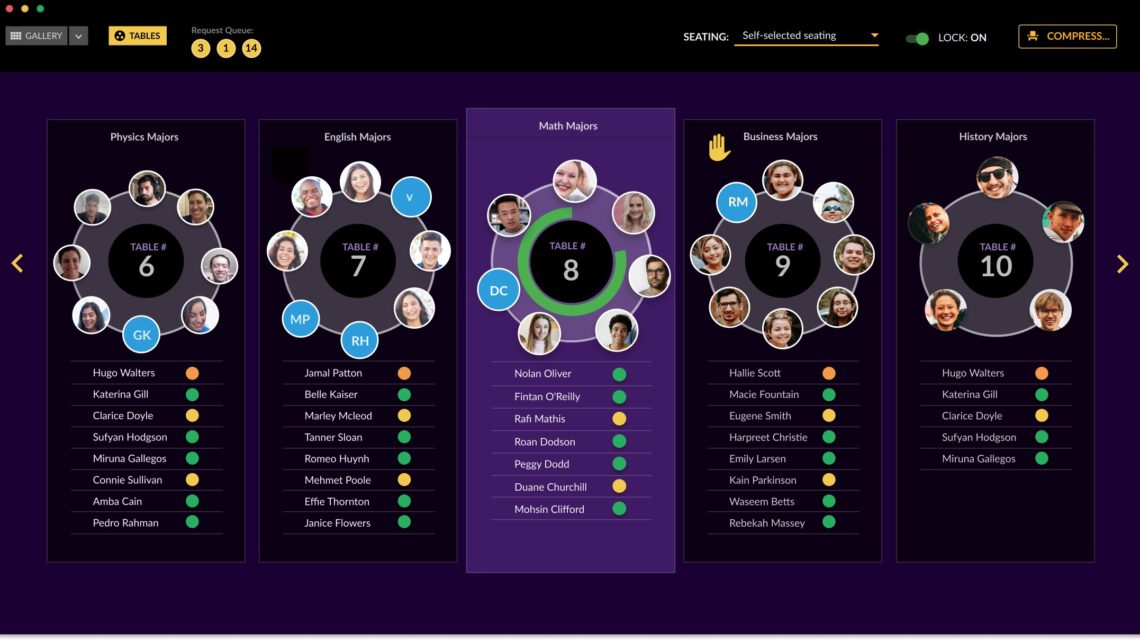 Engageli comes out of stealth with $14.5M and a new approach to teaching by video remotely

Zoom, Microsoft Teams and Google Meet have become standard tools for teachers who have had to run lessons remotely since the start of the Covid-19 pandemic. But they’re not apps necessarily designed for classrooms, and that fact has opened a gap in the market for those looking to build something more fit to the purpose.

Today, a startup called Engageli is coming out of stealth with an app that it believes fills that need. A video conferencing tool designed from the ground up as a digital learning platform, with its own unique take on virtual classrooms, Engageli is aiming first at higher education, and it is launching with $14.5 million in seed funding from Benchmark and others.

If that sounds like a large seed round for a startup that is still only in pilot mode (you can contact the company by email to apply to join the pilot), it might be due in part to who is behind Engageli.

The startup is co-founded by Dan Avida, Serge Plotkin, Daphne Koller and Jamie Nacht Farrell. Avida is a general partner at Opus Capital who in the past co-founded (and sold, to NetApp) an enterprise startup called Decru with Plotkin, who himself is a Stanford emeritus professor. Koller is one of the co-founders of Coursera and also an adjunct professor at Stanford. And Farrell is a former executive from another pair of major online learning companies, Trilogy and 2U.

Avida and Koller, as it happens, are also married, and it was observing their kids in the last school year — when they were both in high school (the oldest is now in her first year at UC Berkeley) — that spurred them to start Engageli.

“The idea for this started in March when our two daughters found themselves in ‘Zoom School.’ One of them watched a lot of Netflix, and the other, well, she really improved her high scores in a lot of games,” he said wryly.

The problem, as he and Koller saw it, was that the format didn’t do a good enough job of connecting with individual students, checking in with them to make sure they were paying attention, understanding, and actually interested in what was being taught.

“The reason teachers and schools are using conferencing systems is because that was what was out there,” he said. But, based on the team’s collective experiences across past e-learning efforts at places like Coursera — which built infrastructure to run university courses for mass audiences online — and Trilogy and 2U (which are now one company that covers both online learning for universities and boot camps), “we thought we could build a better system from the ground up.”

Even though the idea was inspired by what the pair saw playing out with their high school-attending children, Engageli made the decision to focus first on higher education because that was where it was getting the most interest from would-be customers to pilot the service. But also, Avida believes that because higher ed not already has a big market for remote learning, it represents a more significant opportunity.

“K-12 schools will eventually go back to normal,” he said, “but we’re of the opinion that higher education will be a blend with more and more online learning,” one of the reasons also for the founding of the likes of Coursera, Trilogy and 2U. “Younger kids need face-to-face contact, but in college, many students are now juggling work, family and studying, and online can be much more convenient.”

Also there is a very practical selling point to providing better tools to university classrooms: “People pay those tuitions to have access to professors and other students, and this is a way to provide that in a remote world,” he said.

As it appears now, Engageli lets teachers build and run both synchronous (live) and asynchronous (recorded) lessons, giving students and teachers the option to catch up or replace a live lesson if necessary.

The startup’s idea is also to make it as easy to integrate into existing workflows as possible: no need to install special desktop or mobile apps, as the platform works in all major browsers, and Avida notes that it’s also designed to integrate with the software systems that many universities are already using to organise their educational content and track students’ progress. (Making the barrier to entry low is not a bad idea also considering that many institutions are already using other products, making them more entrenched and increasing the challenges of getting them to migrate to something else.)

But perhaps Engageli’s most unique feature is how it views the virtual classroom.

The platform lets teachers create “tables” where students sit together in smaller groups, where they can work together. With tables, the idea is that either an instructor — or in the case of large classes as you might get with university seminars, teaching assistants assigned to tables — can engage with students in a more personalised way.

When a class is delivered asynchronously (that is, recorded), it means that students sitting at a table can still partly be involved in a “live” experience where they can talk about the work with others in their groups. The tables are also opened up before a class starts, and students can go from one to the other to chat with others before the class begins.

On top of the tools that Engageli has built to record and consume lessons, it’s also building a set of analytics that lets professors (or their assistants) monitor how well audio and video and working both for themselves as we as for their audience, and also collect other kinds of “engagement” information, which could come in the form of getting people to ask or answer questions or take polls and other interactive media.

Together, these features create better feedback to make sure that everyone is getting as much out of the remote experience as possible.

Education has not always been one of the buzziest areas in the world of startups — it’s been something of a boring cousin to more headline-grabbing segments like social media, or those taking on giants like Amazon and Google.

But the pandemic has thrown a spotlight on the opportunities in the field, both to fill a sudden surge of demand for remote learning tools, and to create more innovative approaches to doing so, as Engageli is doing here.

Just yesterday, Kahoot — a platform for building and using gamified learning apps — raised $215 million from SoftBank; and other recent rounds have included Outschool (which raised $45 million and is now profitable), Homer (raised $50 million from an impressive group of strategic backers), Unacademy (raised $150 million) and the Indian juggernaut Byju’s (most recently picking up $500 million from Silver Lake).

On top of the recent spotlight on education, it’s also been interesting to see the proliferation of startups that are also coming out of the woodwork to provide new takes on videoconferencing.

Last week, a startup called Headroom — also started by already-successful entrepreneurs — launched with an AI-driven alternative to Zoom and the rest providing not just automatic transcriptions of conversations, but automatically generated highlights and insights into how engaging your webinars and other video content really was.

Apps like Headroom and Engageli are just the tip of the iceberg, with other innovative approaches also stepping out and raising significant funding. The big question will be whether they will get much attention and time from would-be customers who are already “happy enough” with what they already use.

But in a tech world that thrives on the concept of disruption and companies creating businesses out of simply being better approaches to entrenched markets, it’s a bet worth making.

“Dan, Serge and Daphne have repeatedly built fast-growing, extremely successful companies. I am so fortunate to be working with them again,” said Alex Balkanski, a partner at Benchmark, in a statement. “Investing in a company linked to education is incredibly important to me on a personal level, and Engageli has the potential to enable a truly transformative learning experience.”

Hands on with Telepath, the social network taking aim at abuse, fake news and, to some extent, ‘free speech’
Menlo Micro, a startup bringing semiconductor tech to the humble switch, is ready for its closeup