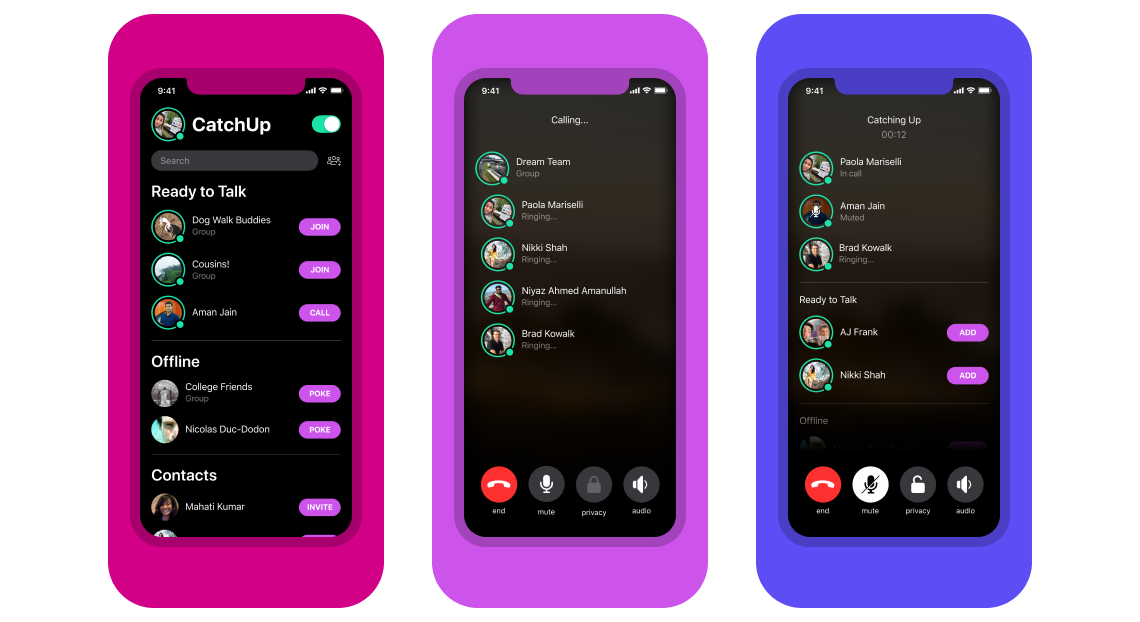 Facebook’s internal R&D group, NPE Team, has today launched a new app called CatchUp that makes it easier for friends and family in the U.S. to coordinate phone calls or set up group calls with up to 8 people. While there are a number of group chat apps available to users today, what makes CatchUp unique is that the calls it enables are audio-only, not video, and it flags when users are available. In addition, CatchUp won’t need a Facebook account to use the service — the app works with your phone’s contacts list.

CatchUp does seem to take some inspiration from Houseparty, in that users in CatchUp can designate when they’re available to talk by setting their status in the app. This is similar to how Houseparty’s video chat app also lets you see who’s live, by sending out notifications when friends open the app and flagging them as “here” in the app’s interface.

Similarly, CatchUp shows users as “Ready to Talk” in the top section of its homescreen, with offline users and other contacts listed below.

Facebook explains the app’s intention is to address one of the key reasons people no longer make phone calls — they don’t know when someone has time to talk and they don’t want to interrupt them. Meanwhile, calls that can’t be answered go to voicemails that recipients don’t bother checking, which forces communication to go through text messaging or chat apps instead. And while video chats are on the rise, a phone call is often more convenient as users aren’t always video-ready or they’re trying to multi-task, not sit in front of a screen.

CatchUp approaches the problem of not knowing if a phone call would bother someone by allowing you to see who is ready and able to talk as soon as you launch the app.

Users can also create and join groups of friends, family, and mutual contacts in the app, as you can with other chat apps. Or they can place 1-on-1 calls as an alternative to using the phone.

Placing a call is simple as well. It’s just a one-button tap — not a complicated process of calling contacts, then “merging” calls as you do on your smartphone’s Phone app.

Facebook explains the idea for the app actually came about prior to the COVID-19 outbreak and subsequent quarantine, but the NPE Team accelerated the app’s development as a result of the pandemic.

While there are already easy ways to make voice calls using Facebook’s own Messenger and WhatsApp apps, the difference is that CatchUp works with your phone’s contacts. Users will have to download the app, but they won’t need to have an existing Facebook account — or an account with any Facebook-owned companies. Plus, the app’s simplified user interface could make it easier for older users, like grandma and grandpa, to navigate. It’s really just a one-screen experience with a toggle button to become “available” to talk.

The app also includes privacy features that allow you to configure which contacts can join your 1-on-1 and group calls.

The app comes from Facebook’s NPE Team, its internal R&D group focused on new app concepts that launch without the benefit of being Facebook-connected. These apps have to stand on their own and gain traction in order to stay alive.

To date, the NPE Team has launched a small handful of apps, including meme creator Whale, conversational app Bump, music app Aux, video app Hobbi, couples app Tuned, and Apple Watch app Kit. (Bump has since shut down.) However, unlike Facebook’s earlier efforts with NPE Team apps which were launched with little fanfare, Facebook announced CatchUp’s debut with a blog post which may indicate it believes the app has more of a chance than others — perhaps because of its similarities to the buzzy social voice app, Clubhouse, which has yet to launch but is already getting press.

CatchUp is currently being tested in the U.S. for a limited time on iOS and Android devices.

Twitter plans to expand its misinformation labels — but will they apply to Trump?