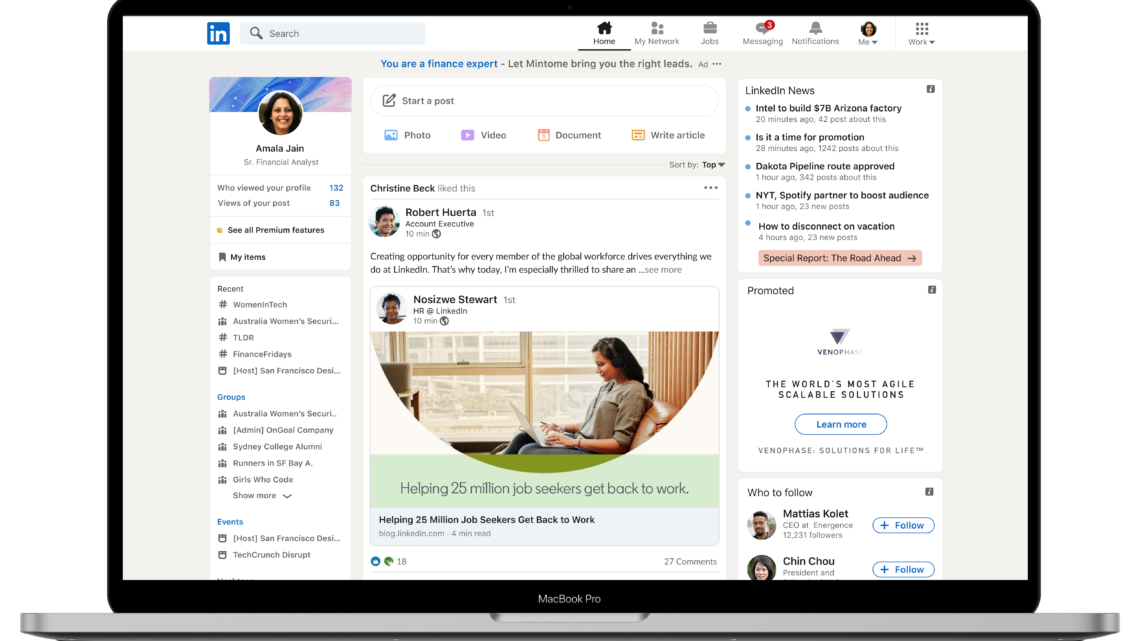 With the employment market remaining sluggish as the world continues to struggle with Covid-19, a company that has built its popular businesses largely around recruitment is launching a redesign that pushes engagement in other ways as it waits for the job economy to pick up.

LinkedIn, the Microsoft-owned site now with 706 million registered users, where professionals network and look for work, is today taking the wraps off a new redesign of its desktop and mobile apps, its first in four years. And within that, LinkedIn is introducing several new things. First and foremost, starting in the US and Canada and then expanding globally, LinkedIn is rolling out its own version of Stories — the popular, ephemeral video and photo narratives that have become a major engagement engine on Snapchat, Instagram and Facebook. It’s also updating its direct messaging service with several new features like video chat. And it’s rebuilt its search feature to net in a wider set of parameters.

The message to LinkedIn’s user base is this: we can be useful in other ways.

LinkedIn has been, to be sure, working on ways to make itself and its job tools particularly relevant to people in the last eight months, which have been truly outside of everyone’s previous norms, with its own takes on helping connect people together. But it’s also come under fire for not necessarily acting fast enough when its hat as recruitment network hasn’t been used very well.

Today’s news, in a way, doesn’t draw a line under all that — indeed, LinkedIn will very much hope to continue being a recruitment go-to as it picks up, even if job posting has really slowed down of late — but it is the company’s demonstration of its other purposes.

“The effort didn’t start with Covid, but over the last few years we’ve tried to diversify, by bringing the social network and conversations aspects of our platform to the forefront,”  and Kiran Prasad, LinkedIn’s VP of product, in an interview.

Stories have been one of the most notable developments across all social media in recent years, so it’s not too much of a surprise to see LinkedIn also jumping on the bandwagon. It started testing them about a while ago in a handful of countries — Brazil, Netherlands, UAE, Australia, and France — and the company said that “millions” of Stories have been shared in that time across hundreds of thousands of conversations. As you would expect, the subjects focus more on things like work life, influencer types speaking to their LinkedIn audiences — the video equivalents, in other words, of the kind of content LinkedIn is already known for, but now in a more engaging format. For now, Prasad said that there are no ads in these, but the plan will be to bring these in eventually.

Messaging, meanwhile, has been one of the more popular services on LinkedIn, allowing for more private conversations between connections and would-be contacts. The site doesn’t disclose usage numbers but says that messages sent are up by 25% in the last year.

That will be something LinkedIn also hopes to boost, again with a turn to video. In this instance, it’s announcing integrating with Zoom, BlueJeans (disclaimer: owned by Verizon, which also owns us), and Microsoft’s Teams for video chats. I have to admit, I’m really surprised it’s taken LinkedIn so long to bring video chat into its messaging service, but better late than never.

Alongside that, it’s also bringing in the ability to recall, delete and edit messages (hear that, Twitter?); respond with emoji’s (already widely used in business communication thanks to them being a part of Slack and other collaboration tools, as well as smartphone keyboards); and tools that flag incendiary and other harassing content.

The search updates, finally, are one more way that LinkedIn is trying to improve how people engage across the whole of its platform. Results now will include not just people and companies, but jobs, courses, events and other content, “making it easier for members to find what they need, and also explore other aspects of LinkedIn they may not have known existed,” in the words of new CEO Ryan Roslansky. Keywords will still be king, but if you search on a word like “Java,” he said, results will include not just people with that skill, but jobs, courses, groups and, yes, Stories, focused on it.

The bigger design focus of the redesign, meanwhile, is best described as a shift to more “warmth.” That might seem like an odd term to associate with LinkedIn, and I’m frankly not sure how well a social networking site for professionals will wear it, but the company is shifting to less of the cold “LinkedIn Blue”, bigger lettering for more accessibility, and more images with less text.

We may still be in the knowledge economy, but LinkedIn’s new approach seems less intent on trying to remind you of that. Indeed as work and home life become one for many of us, so too is LinkedIn trying to cross that chasm itself.