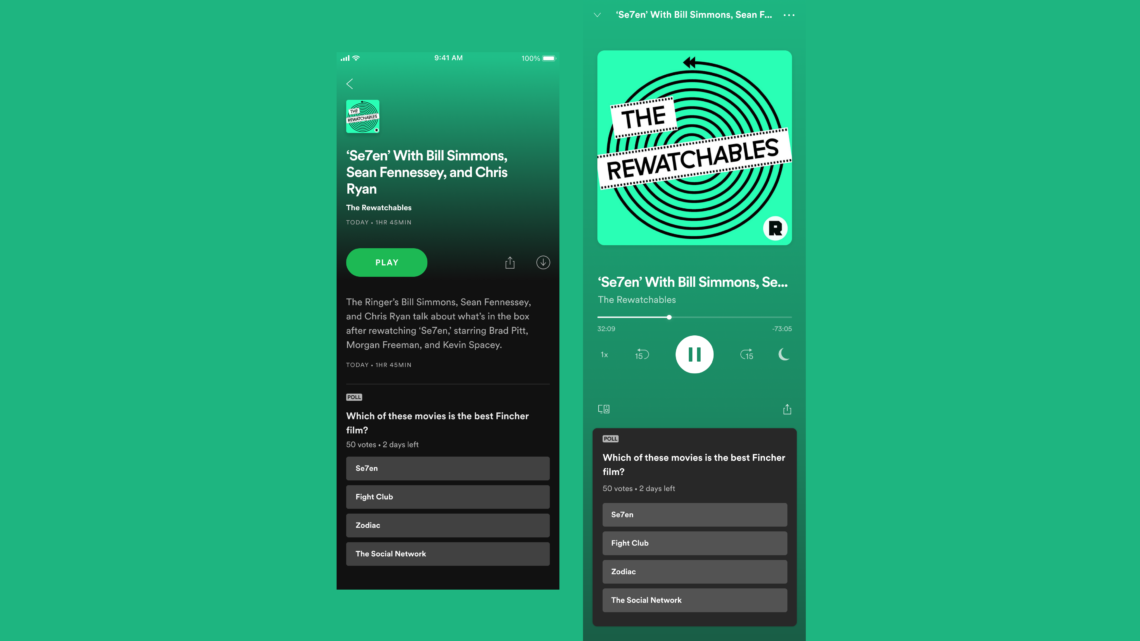 Spotify adds an interactive feature for podcasts with launch of ‘Polls’

Spotify today is introducing a new feature designed to make podcasts more interactive. The company says it’s beginning to test “Polls,” a tool that will allow listeners to engage with podcasts by answering questions posed by the podcast hosts during the show. The polls will appear in the Spotify app, and can be found either on the Now Playing screen or on the podcast episode’s page.

The user can then answer the question and view how their answer stacks up with the rest of the listener base in real-time. They won’t, however, be able to view the results of the poll without first participating themselves.

Participation in polls is entirely optional, Spotify says, and the votes will remain anonymous.

In other words, the goal is not to accumulate individualized data on listeners, but rather give the podcast host a way to better understand their audience. For example, a host could ask the audience to vote on who the next guest should be, or they could ask them to settle a debate that cropped up on the show. Polls will also be able to support either a “choose one” or “choose multiple” option for the answers, to give them some flexibility.

Podcasts that support polls will only be able to feature one per episode, and each poll can only pose one question. But there’s no limit to how many total polls the podcast, overall, could include — the creator could offer a poll with every episode, if they preferred.

At launch, the polls feature is only being made available to a small group of beta testers, including The Rewatchables, Incredible Feats with Dan Cummins, and Crime Countdown. Spotify tells TechCrunch it plans to onboard other Spotify Originals and Exclusives over time, as the test progresses. But there’s no specific ETA or timeline for that expansion, at present.

The test will roll out to most Spotify listeners beginning today, September 23. The full Spotify user base will be able to see the polls later on, the company says. This is being considered the start of the beta because no other podcasts have tested the feature ahead of today’s announcement.

This is not the first feature Spotify has introduced to make its app the prefered podcast player.

The company has in the past also rolled out support for podcast playlists, personalized daily podcast recommendations, editorially curated podcast suggestions, and, more recently, video podcasts and podcast top charts. But where many of its other features were designed to attract users to the Spotify app, the addition of Polls is also meant to cater to podcast creators, not just fans.

Spotify today has one of the largest podcast catalogs, now topping 1.5 million podcasts, thanks to its investments in acquiring podcast companies, like Gimlet Media and the Ringer, as well as podcasting tools, like Anchor.

The company, however, just lost one of its biggest exclusive podcast stars, Joe Budden, when it failed to come to terms on a new deal, even after offering the creator a significant raise.

Spotify has also been facing the downside of its aggressive podcast acquisition strategy in recent days, as it dealt with the backlash over its $100 million exclusive deal with Joe Rogan. The podcast host had been spreading misinformation about the Oregon forest fires, which he later apologized for. But Spotify faced abuse from listeners and bad PR as people became aware of the problem.

That incident highlighted the difficulties with Spotify’s “exclusives” strategy, where it’s not just buying access to a large star and their audience, but also the headaches they bring with them.

In the meantime, it’s continues to try and woo more podcasters to join its platform by offering creative tools and features, like these new Polls.

During the test, Polls will be available for 90% of of users across all markets, on both iOS and Android devices.

Amazon removes the $500 Prime Bike, says it has nothing to do with the Peloton knock-off