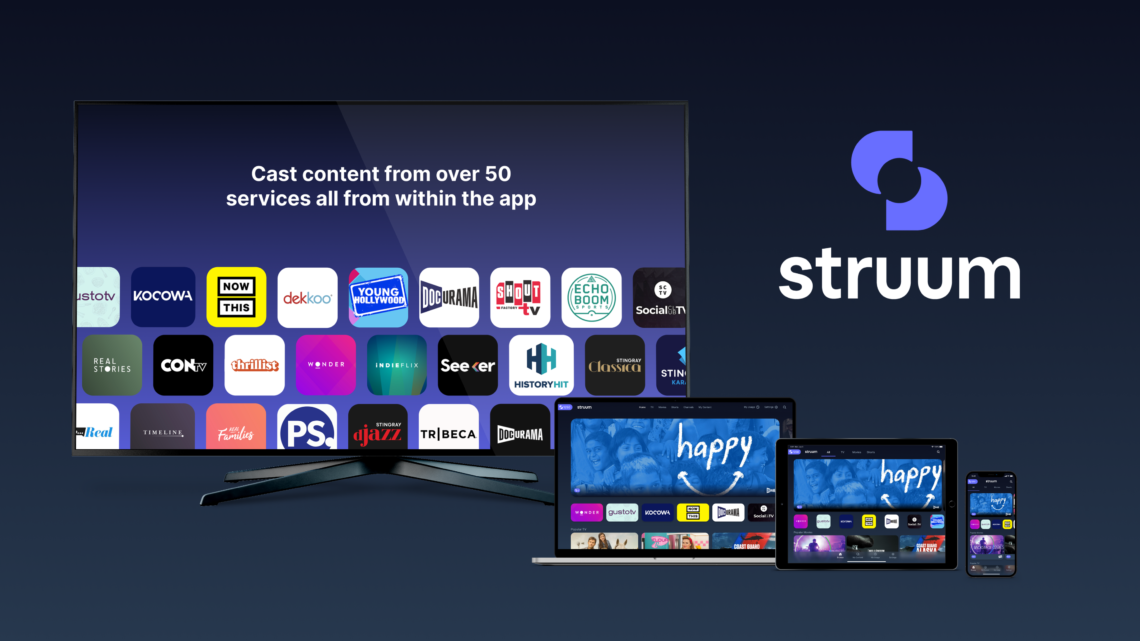 Struum launches its ‘ClassPass for streaming’ service to the public

Struum, the new streaming service from former Disney and Discovery execs, is today officially launching to the public. Unlike traditional on-demand streamers, such as Netflix, the Struum model is more akin to a “ClassPass for streaming,” as its plan is to aggregate content from smaller video services then provide access under its own subscription.

Today, the streaming landscape is dominated by larger subscription services, including Netflix, Hulu, Amazon Prime Video, Apple TV+, HBO Max, Disney+, and YouTube, who together have a 75% share of the market, according to Nielsen. But Struum believes there’s a potential for another service powered by the long tail of  the over 250 niche and speciality streamers.

Many of these smaller services offer their own subscriptions, but will never achieve Netflix-size scale because of their more limited catalog and scope. Struum offers them an alternative path to revenue. Each month, Struum customers will pay a $4.99 subscription fee to access the Struum app where they’re then provided with 100 “credits” they can use to sample and consume content — just as ClassPass did with gym classes.

Over time, if the customer continues to use their subscription to routinely access content from one service, they can then opt to become a subscriber to that service from within the Struum app. This part of the business isn’t all that different from Amazon Prime Video Channels or others like it. But the difference is that Struum’s sampling model is what helped the customer discover the niche streamer in the first place.

Struum, meanwhile, generates its own revenue from customers’ subscriptions, which it shares with its content partners. It won’t say what sort of cut it takes, however.

In total, Struum’s partners will provide customers with access to tens of movies and TV shows across a range of categories and genres, like classic films, indies, foreign content, cult hits, lifestyle programming, reality, true crime, and more.

Struum’s app guides users to their interests through a simple interface where it curates content into editorial groupings organized much like the rows of recommendations you’d find in Netflix. This includes the company’s own picks (“Struum Selects”), as well as groupings by genre — like Comedy, Action Thrillers, LGBTQ + Documentaries, Class Movies, Incredible Science, and others. You can also browse by type from categories across the top, to filter by only Movies, TV shows or Shorts.

When you find something you want to watch, you can click a button to stream the content for a certain amount of credits. You can then view that content at any time for the next 30 days and even download it for offline access.

At launch, Struum’s service is available on iOS and web, and supports AirPlay and Chromecast. This summer, it will expand to more platforms, including Android, Apple TV, Android TV, Amazon Fire TV, and Roku.

The team came together in 2020, just before the Covid-19 pandemic broke out across the U.S., which drove increased demand for streaming content. And though that demand may be here to stay, it remains to be seen whether Struum’s ClassPass-like model makes the best sense for streaming’s long tail.

Despite its unique streaming business model, the service will effectively compete with AVOD (ad-supported video on demand) players in terms of aggregating both older and niche content. AVOD services — like Tubi, Pluto TV, The Roku Channel, IMDb TV, and others — also help users who can’t find anything they want to watch on their preferred paid subscription apps. And they often aid consumers who are in search of a particular movie or show but don’t want to pay for a rental. Struum believes by aggregating content it can encourage these users to pay for yet another subscription.

In other words, Struum will have to convince users to change their existing TV habits in order to find success, and that’s a risky bet.

But Struum believes the fragmentation of the streaming market may actually work in its favor. As consumers get fed up so many different services and content that jumps around as rights owners forge new licensing agreements, Struum could step in as someone’s fourth subscription.

We view ourselves as the ultimate complementary service and a perfect fit for TV and film lovers who are increasingly frustrated by the costs, complexity and effort required to discover and watch what they want,” noted Struum CEO Lauren DeViller.

Struum is backed by a multi-million-dollar investment from former Disney CEO Michael Eisner through his firm, Tornante Company. Other investors include Firstlight Media, whose technology powers the video service, and Gaingels, which focuses on backing LGBTQ+ founders and allies.

The Station: Rivian rolls towards an IPO and Quantumscape makes a big battery hire