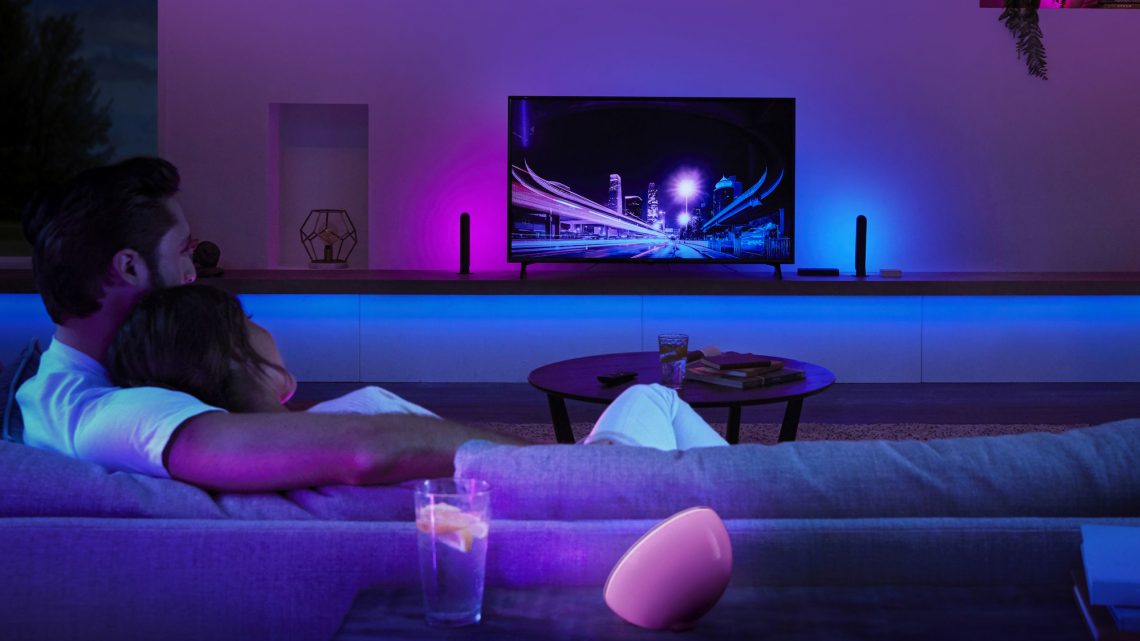 Philips has steadily expanded its Hue line of smart lighting products to cover the entire home, inside and out. But while the ability to remotely control your lighting, including adjusting color, intensity and brightness is great, one of its more recent products focuses more on how to turn all those connected lights into a dynamic, at-home interactive entertainment experience. The Philips Hue Play HDMI Sync Box is a relatively simple device that sits between your video sources, including things like game consoles and the Apple TV, and your television, enabling synced light shows that can take advantage of a wide range of Hue products.

The Hue Play HDMI Sync Box is at its core an HDMI switcher, offering four HDMI inputs and a single HDMI output. Signals from your input devices (e.g., Apple TV, Roku, Xbox, PS4, etc.) go into the box and are passed through to the TV, with switching happening automatically depending on which device was most recently active (you can also change them manually with the app and with voice controls).

The Sync Box supports a range of modern quality standards for display and audio. It supports 4K 60Hz resolution, HDR10+ and Dolby Vision standards, as well as Dolby Atmos surround sound. It also supports HDMI 2.0b with HDCP 2.2 compliance for copyright protection.

You will need not only Hue colored lights, but also a Hue Bridge (the second-generation, rounded-square version) to ensure that the Hue Sync Box is more than just a particularly expensive HDMI hub, but it does that job very well, too. If you do have Hue products, like the Hue Play light bars that can easily mount on top of your TV stand or to the back of your TV itself, or the Hue Signe multicolored floor or table lamps, then you can use the Sync companion app to ensure your lights reflect what’s going on on screen — for any video that plays through the box from any source.

Why would you want this? Well, mostly because it looks really, really cool. Hue Sync has already been available as a software feature for you to use with video played back on Macs and PCs when used in combination with a monitoring tool. But that has a lot of limitations, including not being able to work with official Netflix apps and Netflix in the browser. The Sync Box eliminates any potential roadblocks and also means you can use regular streaming and gaming sources without having to run a media center PC.

The box itself is relatively large, but that seems like it’s mostly to accommodate the multiple HDMI ports. It’s very short, despite being about twice the surface area of an Apple TV, so it should be very easy to integrate into your existing home theatre setup, whatever that entails.

Setting up the Hue Play HDMI Sync Box is very easy and requires only installing the app and pressing the sync button on your Hue Bridge when instructed to do so. As mentioned, you can plug in up to four sources and the box will switch between them automatically when you use an input device or you can also manually change the input (and rename them) using the app. The app also allows you to tweak the intensity, brightness and responsiveness of the light, making it more subtle or more extreme, depending on your preferences and your activity. A “Game” setting, for instance, sets it to maximum intensity and responsiveness for a more dynamic effect befitting fast-paced interactive content.

I found that the lighting was extremely good at mimicking the colors and brightness of a scene, especially if you take the time to accurately set up the position of your Hue lights for a dedicated “entertainment area” in the official main Hue app. It’s an effect that, when used in its most subtle settings, can basically fade away but still provide genuine enhancement for the watching experience, making it feel more immersive. At its maxed out settings, it’s much more noticeable, but still something that basically fades away into the background over an extended period of use, in a good way.

Especially since the firmware update, the Hue Play Sync Box has proven a fantastic addition to my home theater setup, providing an extra bit of flair to every TV watching experience. It’s obviously more effective in dark rooms, but it really seems to especially complement high-quality OLED screens that produce vibrant colors and true, deep blacks.

The Hue Play HDMI Sync Box is a bit of an extravagance at $229.99, but it definitely adds to the overall home TV-watching experience, for movies, streaming and for gaming. The four HDMI inputs mean you can also use it to add more ports to your TV, if that’s something you need, and the recent updates mean you’re not going to sacrifice any video quality while doing so.

How to Craft and Nail Your Brand Voice