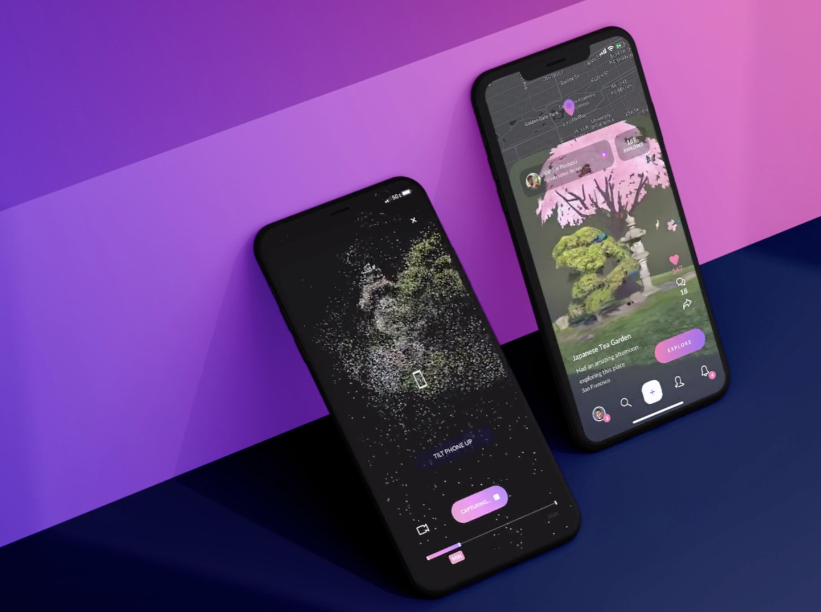 The world is being mapped in 3D — one brick, one bench, one building at a time. For things like hyper-accurate augmented reality, autonomous robots and self-driving cars, 2D maps and GPS only get you so far.

Apple is building its map with lasers strapped to the tops of cars. Niantic has talked about building 3D maps of parks and public spaces by way of user-submitted imagery. The Army is making 3D maps with drones.

Ubiquity6, a startup that’s spent much of the last two years quietly chipping away at the challenges of building shared augmented reality experiences, is trying something different: a social network, of sorts, for scanning and sharing 3D spaces.

The company’s first publicly launched app, Display.land, started rolling out on iOS and Android over the weekend. Part 3D scanner and part social network, it lets you scan a location or object, edit it (cropping it to just the bits you’re interested in, or adding pre-built digital objects), and share it with the world. Want everyone to see it? You can pin a scan to a map, allowing anyone panning by to explore your scan. Want to keep it to yourself? Flip the privacy toggle accordingly.

The idea: quick and simple 3D scans of real-world spaces, shareable at large or just with the people you choose. Exploring a new city and found some neat art in an alleyway? Scan it and post it for everyone to “walk” around. Renting an apartment and want to give potential tenants some idea of what the space is like? Scan it, put the link in the listing and it’ll open right up in their browser without any downloads. 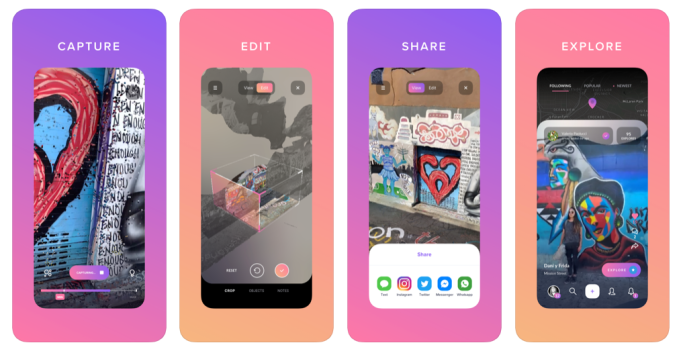 Starting a new scan is simple: hit the “new” button, find some particularly interesting bit of geometry to focus on and hit “begin.” As you radiate away from the initial focal point, you’ll see your camera view filling with countless colored spheres. Each sphere represents a geometric feature that the camera has captured, helping to highlight the areas that have been sufficiently covered.

As you roam, a bar starts to stretch across the bottom of your screen. Once it seems like you’ve captured enough geometry for a complete mesh, the app will let you know — but if you want your scan to be more true to life, you’re free to continue scanning until the bar is completely full.

Between the point cloud data and all of the photographic textures being captured, these scans can get pretty big. My test scans were coming in at a few hundred megabytes. That’ll eat up your data quick if you’re uploading over a cell network, so you’ve got the option to hold off uploading until you’re back on Wi-Fi. Once uploaded, Ubiquity6 will take a few minutes to process everything, crunching all of the raw data into a model you can fly around and explore.

While the scans it makes are rarely perfect, it’s… really damned wild what they’re pulling off with just your phone’s RGB camera and its assorted built-in sensors. With a bit of practice and sufficient lighting, the scans it can pull off are rather incredible. Check out this scan of Ron Mueck’s Mask II sculpture from the SF MOMA, for example — or this pool from a skatepark in SF’s Mission District. (And note that it’s all rendering live in the browser; you can scroll to zoom, orbit around, etc.) Scanning/editing/sharing is free. If you’re feeling fancy, you can even open your scan in a browser and download it in a file format (OBJ, PLY, or GLTF) that’s ready to be fiddled with in your desktop 3D modeling software of choice. As for how they’ll make money? The company plans to charge companies that need a bit more than the base offering — if a company wants to 3D scan a space at the highest possible fidelity, for example, they can pay extra for the added processing time.

Meanwhile, they’re laying the groundwork for what seems to be the company’s actual interest: shared, multiplayer augmented reality experiences. For now, these scans are mostly static — you can add cutesy 3D models like treasure chests and floating butterflies to mix it up a bit, but they’re mostly there just to be pretty. In time, though, they’re looking to add gaming elements; think games that automatically unlock when you walk into a certain physical space, with physics and functionality determined by the real-world geometry around you.

Ubiquity6 has raised a little over $37 million to date. It’s backed by KPCB, First Round, Index Ventures, Benchmark and Gradient, and was part of Disney’s fifth accelerator class.