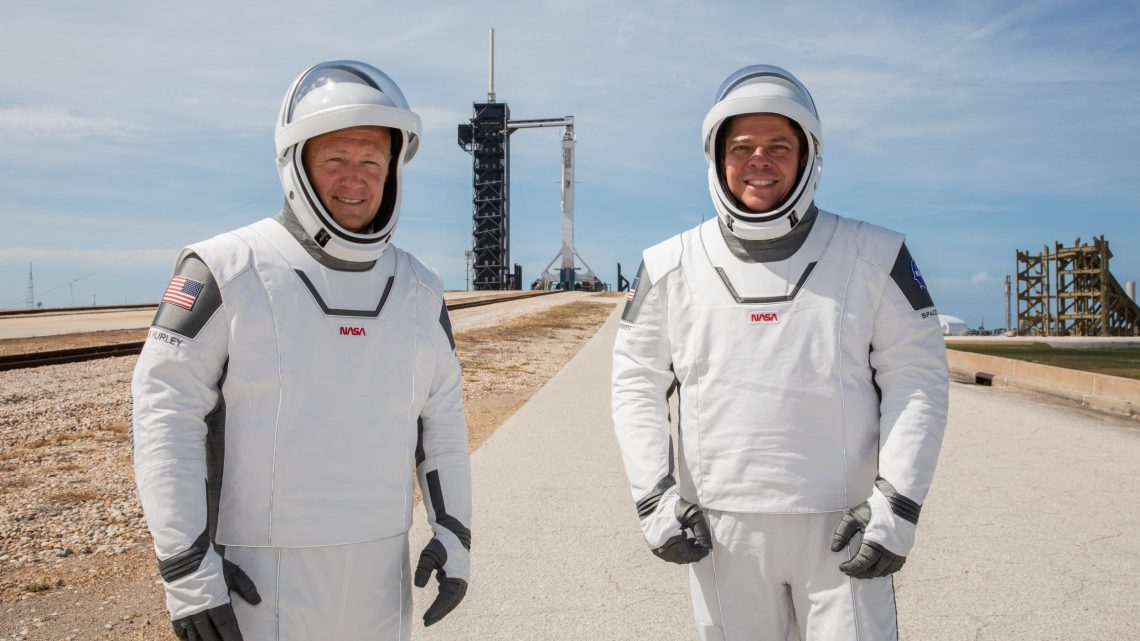 Inside the first American spacecraft to take humans to orbit since the Space Shuttle, launching today, are, well, humans. And those humans are wearing brand new spacesuits that are also making a historic debut. Ahead of today’s launch (which you can watch here), NASA and SpaceX gave a fresh look at the new suits, which we may be seeing much more of soon.

The spacesuits were designed by SpaceX in collaboration with NASA and the astronauts going up today, Bob Behnken and Doug Hurley. They’re intended to bring modern materials and technology to a comfortable form factor that integrates seamlessly with the Crew Dragon capsule.

These aren’t, it is important to note, a replacement for the familiar EVA suits that have been in use for decades, though those are also being redesigned in-house. The ones Behnken and Hurley will wear are pressure suits, akin to what fighter-jet pilots wear. These custom-fitted garments are meant to provide protection against the dangers of launch, including brief periods of vacuum or high heat, but not outer space.

The SpaceX suits are flame and impact-resistant and have communications and climate control built right in. The helmet has the radio and mics, naturally, and air and electricity flow through a single umbilical cable that connects to the wearer’s seat in the spacecraft.

“One of the things that was important in the development of this suit was to make it easy to use, something that the crew just has to literally plug in when they sit down, and then the suit kind of takes care of itself from there,” said SpaceX’s Chris Tripp in the NASA video highlighting the suits. “It’s really part of the vehicle, so we think of it as a kind of suit-seat system.”

Considering the advances that have been made over the last decade in electronics and software, astronauts and mission control should expect improved and simplified communications — the kind of noise reduction and voice detection we expect in our video calls nowadays is also very useful in aerospace.

Another interesting change is in the gloves, which must be durable yet flexible, and at the same time conductive — because the astronauts operate the Dragon capsule via touchscreen. It would be no good if they had to take off a glove to make a selection.

‘This is certainly different’: Astronauts on controlling the Dragon spacecraft via touchscreen

“[We] worked with them to define the way you interface with it — the way your touches actually registered on the display, in order to be able to fly it cleanly and not make mistakes touching it, not potentially putting in a wrong input,” Behnken said in a recent NASA press conference.

Like everything else aboard the capsule, the suits will be put to their first full-scale test today, though of course they’ve been through all kinds of in-house evaluations before.

“It took us three, almost four years to design suits that both look good and work well,” said SpaceX founder and CEO Elon Musk in a recent interview. “We want to inspire kids to say that that one day they want to wear that uniform… get them fired up about, ‘Yeah, I want to be an astronaut. I want to work on aerospace engineering, on advanced spaceflight.’ What today is about is reigniting the dream of space.”

Angling to be eyewear’s next big thing, Futuremood launches with mood-altering sunglasses