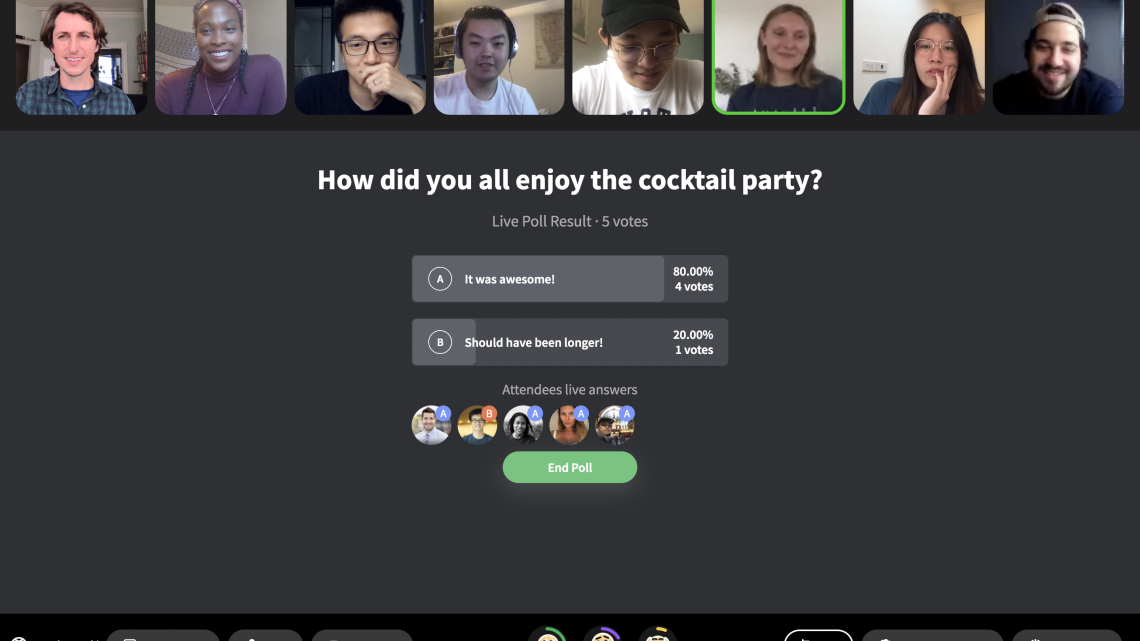 Run The World, a year-old startup that’s based in Mountain View, Calif., and has small teams both in China and Taiwan, just nabbed $10.8 million in Series A funding co-led by earlier backer Andreessen Horowitz and new backer Founders Fund.

It’s easy to understand the firms’ interest in the company, whose platform features every functionality that a conference organizer might need in a time of a pandemic and even afterward, given that many outfits are rethinking more permanently how to produce events that include far-flung participants. Think video conferencing, ticketing, interactivity and networking.

We’d written about the startup a few months ago as it was launching with $4.3 million in seed funding led by Andreessen partner Connie Chan, who was joined by a slew of other seed-stage backers, including Pear Ventures, GSR Ventures and Unanimous Capital. Perhaps unsurprisingly given the current climate, Run The World has received a fair amount of traction since, according to co-founder and CEO Xiaoyin Qu, who’d previously led products for both Facebook and Instagram.

“Since we launched in February — and waived all set-up fees for events impacted by the coronavirus — we are receiving hundreds of inbound event requests each day,” Qu says. More specifically, she says the startup has doubled the size of its core team to 30 employees and enabled organizers from a wide variety of countries to oversee more than 2,000 events at this point.

Qu says that a lot of event planners who’ve used Zoom to run webinars are now choosing Run The World instead because of its focus on engagement and social features. For example, attendees to an event on the platform are invited to create a video profile akin to an Instagram Story that can help inform other attendees about who they are. It also organizes related “cocktail parties,” where it can match attendees for several minutes at a time, and attendees can choose who they want to follow up with afterward.

That heavy focus on social networking isn’t accidental. Qu met her co-founder, Xuan Jiang, at Facebook, where Jiang was a technical lead for Facebook events, ads and stories.

Of course, Run The World — which takes 25% of ticket sales in exchange for everything from the templates used, to ticket sales, to payment processing and streaming and so forth — still has very stiff competition in Zoom. The nine-year-old company has seen adoption by consumers soar since February, with 300 million daily meeting participants using the service as of April’s end.

Not only is it hard to overcome that kind of network effect, but Run The World is hardly alone in trying to steer event organizers its way. Earlier this week, for example, Bevy, an events software business co-founded by the founder of the events series Startup Grind, announced it has raised $15 million in Series B funding led by Accel. Other young online events platforms to similarly raise venture backing in recent months include London-based Hopin (whose recent round was also led by Accel, interestingly) and Paris-based Eventmaker.

Still, the fresh funding should help. While Run The World has grown “entirely organically through word of mouth” to date, says Qu, the startup plans to grow its team and will presumably start spending at least a bit on marketing.

It could well get a boost on this last front by its social media-savvy investors.

In addition to a16z and Founders Fund, numerous other backers in its Series A include Will Smith’s Dreamers VC and Kevin Hart’s Hartbeat Capital.