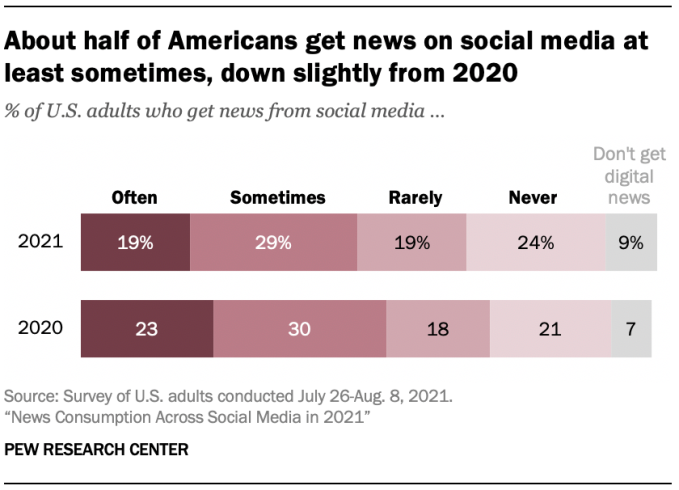 Study finds half of Americans get news on social media, but percentage has dropped

A new report from Pew Research finds that around a third of U.S. adults continue to get their news regularly from Facebook, though the exact percentage has slipped from 36% in 2020 to 31% in 2021. This drop reflects an overall slight decline in the number of Americans who say they get their news from any social media platform — a percentage that also fell by 5 percentage points year-over-year, going from 53% in 2020 to a little under 48%, Pew’s study found.

By definition, “regularly” here means the survey respondents said they get their news either “often” or “sometimes,” as opposed to “rarely,” “never,” or “don’t get digital news.”

The change comes at a time when tech companies have come under heavy scrutiny for allowing misinformation to spread across their platforms, Pew notes. That criticism has ramped up over the course of the pandemic, leading to vaccine hesitancy and refusal, which in turn has led to worsened health outcomes for many Americans who consumed the misleading information.

Despite these issues, the percentage of Americans who regularly get their news from various social media sites hasn’t changed too much over the past year, demonstrating how much a part of people’s daily news habits these sites have become. 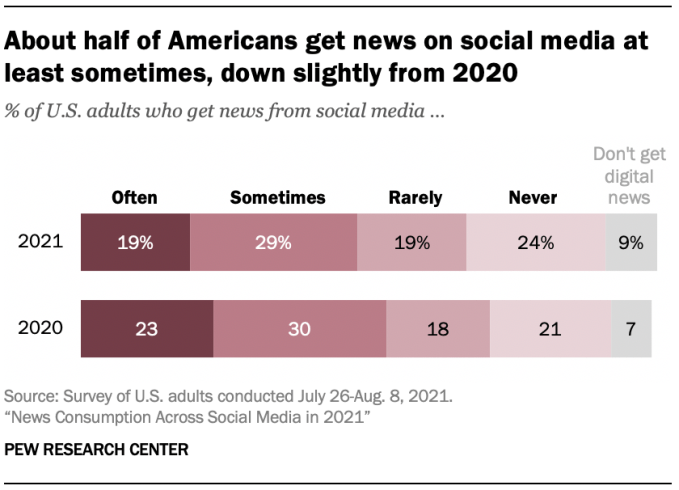 In addition to the one-third of U.S. adults who regularly get their news on Facebook, 22% say they regularly get news on YouTube. Twitter and Instagram are regular news sources for 13% and 11% of Americans, respectively.

However, many of the sites have seen small declines as a regular source of news among their own users, says Pew. This is a different measurement compared with the much smaller percentage of U.S. adults who use the sites for news, as it speaks to how the sites’ own user bases may perceive them. In a way, it’s a measurement of the shifting news consumption behaviors of the often younger social media user, more specifically.

Only one social media platform grew as a news source during this time: TikTok.

There are demographic differences between who uses which sites, as well.

White adults tend to turn to Facebook and Reddit for news (60% and 54%, respectively). Black and Hispanic adults make up significant proportions of the regular news consumers on Instagram (20% and 33%, respectively.) Younger adults tend to turn to Snapchat and TikTok, while the majority of news consumers on LinkedIn have four-year college degrees.

Of course, Pew’s latest survey, conducted from July 26 to Aug. 8, 2021, is based on self-reported data. That means people’s answers are based on how the users perceive their own usage of these various sites for newsgathering. This can produce different results compared with real-world measurements of how often users visited the sites to read news. Some users may underestimate their usage and others may overestimate it.

People may also not fully understand the ramifications of reading news on social media, where headlines and posts are often molded into inflammatory clickbait in order to entice engagement in the form of reactions and comments. This, in turn, may encourage strong reactions — but not necessarily from those worth listening to. In recent Pew studies, it found that social media news consumers tended to be less knowledgeable about the facts on key news topics, like elections or Covid-19. And social media consumers were more frequently exposed to fringe conspiracies (which is pretty apparent to anyone reading the comments!)

For the current study, the full sample size was 11,178 respondents, and the margin of sampling error was plus or minus 1.4 percentage points.