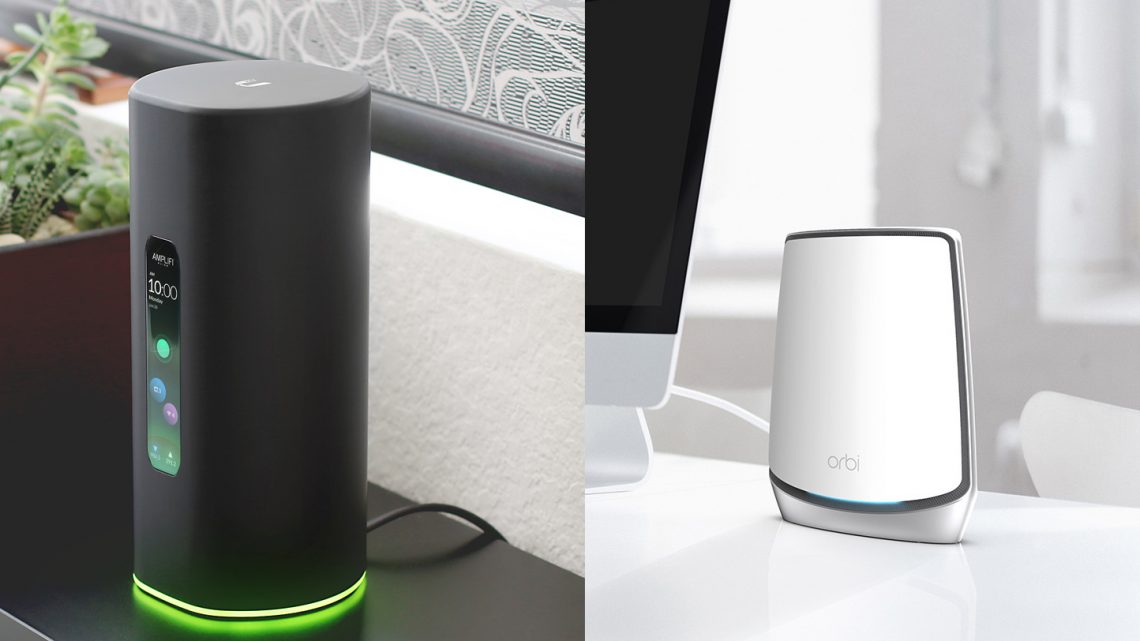 Wi-Fi 6 is here — making its way to more and more devices, with a noteworthy inclusion on last year’s flagship iPhone 11 lineup. This next-generation Wi-Fi technology provides faster speeds for transferring data between devices, but more importantly, it also means your system will be better equipped to handle multiple Wi-Fi devices connected at one time, without slowdowns or interruptions — and it can even reduce battery drain in mobile devices.

The number of Wi-Fi 6 routers and mesh systems has definitely improved dramatically since the debut of the iPhone 11, and there are a range of options available at a variety of price points. But for those looking to get the most out of their Wi-Fi 6 setup, two available systems in particular can provide all the power you need, with two different approaches that will appeal to differing user needs.

Netgear’s Orbi lineup is a popular mesh option, and its latest AX6000 series offers Wi-Fi 6 networking in either a two- or three-pack configuration. Even the two-pack is able to cover a home of up to 5,000 square feet, Netgear claims, and it can support up to 2.5G internet connections from an Ethernet-connected modem.

The Orbi AX6000 includes Netgear’s X technology, which can optimize streaming and media connections for optimal performance. Both the base unit and the satellite include 4 Gigabit Ethernet LAN ports for hardwired connections, which means you’re less likely to need an Ethernet switch to connect all your gear.

In real-world testing, the AX6000 proved a remarkably reliable and far-reaching mesh system. I tested a two-device configuration, with one base unit and one satellite, and really saw the advantages of its range. In my testing, I was able to enjoy a consistent and strong Wi-Fi connection with the AX6000 as far as around 500 feet or more outside — useful in the situation where I had it installed in a lake house for reaching all the way down to a dock.

Orbi’s system can be managed from a mobile app, which provides an overview of devices attached, with detailed information available for each. You can pause and resume access for each connected device from the app, and also enable features like a dedicated guest network.

Netgear also offers a service called Armor that provides real-time threat detection and protection on your network. It’s a subscription service, with a limited free trial included when you first set up your Orbi system. In practice, it did seem to effectively detect and block phishing and malware connections, and it’s optional as an ongoing paid add-on.

Netgear’s offering also offers a level of simplicity in terms of the app and network management that has advantages and downsides, but that is probably much better suited to casual or non-technical users. I found that it lacked some advanced options I was looking for, like the ability to separate 2.4Ghz and 5Ghz networks under separate network SSIDs to more easily connect some smart home devices, but that’s probably not a feature most users want or need.

The AmpliFi Alien router from AmpliFi, which is the consumer arm of commercial networking giant Ubiquiti, offers all the customization that an advanced user could want, on the other hand. The $379 device can act as a standalone tri-band router, or it can pair up with other Alient base stations (a two-pack is $699) to form a mesh network for greater coverage. Unlike the Orbi option, AmpliFi’s hardware doesn’t have dedicated base station and satellite units, meaning they can be swapped out as needed to set up different networks if you don’t need the mesh capabilities.

AmpliFi’s Alien in testing also offered excellent coverage, and worked extremely well providing access to the full capabilities of my 1.5Gbps finer optic connection. In long-term testing, their reliability has been impeccable in terms of network uptime, and AmpliFi has consistently and reliably pushed updates to improve their performance as well.

Building on their reputation for delivering the best in advanced networking through Ubiquiti, AmpliFi has also equipped the Alien with some impressive hardware specs, including a custom antenna array and a dedicated 2.2 GHz 64-bit quad-core CPU in each base station. That’s more computing power than you’ll find in some mid-range Android smartphones, all committed to the task of continually optimizing your network and device connections for maximum performance.

All that onboard intelligence doesn’t necessarily translate to complexity, however — AmpliFi is meant to be Ubiquiti’s more accessible consumer brand, and it stays true to that with its simple, app-based setup and control. The AmpliFi app is very user-friendly and well designed, and includes all the features you’d expect from a mesh networking system, including individual device views and controls, as well as rule creation and full stats reporting. You can also set up guest networking, and configure more advanced features like distinct SSIDs for different frequency networks.

The AmplifFi Alien also has a colorful, high-resolution display that provides at-a-glance information, including current network performance, signal strength and a list of connected devices. Both these menus and the in-app ones can get a little information dense compared to other options like the Orbi, however, which is why I think it’s a much better option for someone more comfortable with tech in general, and networking tech in particular.

The Alien system offers great expandability and flexibility (albeit with a cost, as each is $379) and amazing custom control features. It’s definitely the networking solution to beat when it comes to advanced at-home Wi-Fi 6 networking.

More and more Wi-Fi 6 options are coming to market as the technology shows up on more consumer devices, and as mentioned, you can also get them at increasingly affordable prices. But Wi-Fi 6 stands to be an investment that should provide you with many years of networking advantages, with more benefits accruing over time, so it’s likely worth investing money in a top-tier system that will provide future-proof performance.

Both the Netgear Orbi system and the AmpliFi Alien offer terrific performance, easy setup and a host of great features. Orbi’s AX6000 is likely better for those who prefer to set-it-and-forget-it, and who might appreciate the option of setting up threat detection on an ongoing basis. The Alien is better for power users and anyone who wants the ability to change their configuration over time — including potentially splitting up their networking hardware to use in multiple locations.

Ban or no ban, Facebook wins in U.S. threats against TikTok