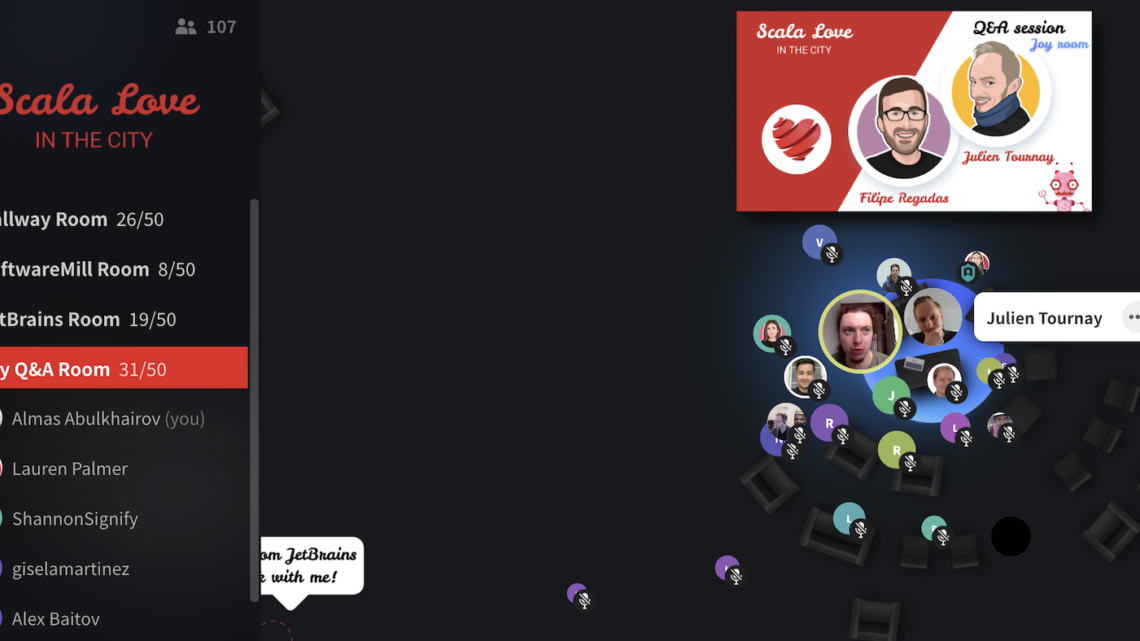 With most of us locked into a square video box on platforms like Zoom, the desire to break away and perhaps wander around a virtual space is strong. These new ways of presenting people — as small circles of videos placed in a virtual space where they can move around — has appeared in various forms, like “virtual bars” for the last few months during global pandemic lockdowns. Hey, I even went to a few virtual bars myself! Although the drinks from my fridge could have been better.

The advantage of this spatial approach is it gives a lot more “agency” to the user. You feel, at least, a bit more in control, as you can make a “physical” choice as to where you go, even if it is only still a virtual experience.

Now SpatialChat, one of the first startups with that approach that launched on ProductHunt in April last year, is upping the game with a new design and the feature of persistent chats. The product debuted on ProductHunt on April 20, 2020, and rose to No. 3 app of the day. The web-based platform has been bootstrapped by the founders with their own resources.

SpatialChat is now adding a special tier and features for teams running town hall meetings and virtual offices and says it currently has more than 3,000 organizations as paying customers, with more than 200,000 total monthly active users.

The startup is part of a virtual networking space being populating by products such as Teamflow, Gather and Remo. Although it began as an online networking events service, it’s now trying to reposition as a forum for multigroup discussions, all the way up from simple stand-up meetings to online conferences.

SpatialChat uses a mix of “proximity” video chats, screen sharing and rooms for up to 50 people. It’s now putting in pricing plans for regular, weekly, and one-time use cases. It says it’s seen employees at Sony, Panasonic, Sega, LinkedIn, Salesforce and McKinsey, as well as educators and staff at 108 American universities, including Harvard, Stanford, Yale and MIT, use the platform.

Almas Abulkhairov, CEO and co-founder of SpatialChat says: “Slack, Zoom and Microsoft Teams represent a virtual office for many teams but most of our customers say these apps aren’t a good fit for that. They don’t provide the same serendipity of thought you get working shoulder to shoulder and ‘Zoom fatigue’ became a term for a reason. We want to bring the best from offline work.”

Konstantin Krasov, CPO at Data Souls, who used the platform, said: “We had 2,500 people in attendance during a two-day event that we hosted for our community of 50,000 data scientists. SpatialChat enabled us to make a cool networking event, Q&A and AMA with thought leaders in data science.”